8 Ways Silicon Valley is Taking it to "The Man" 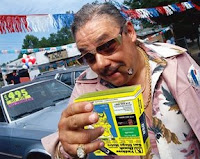 There's little doubt that Silicon Valley has thrown the 'establishment' for a loop. Old media, like network television, radio, newspapers, Yellow Pages, are shaking in their boots as Silicon Valley startups innovate and capture the world's attention at a startling pace (and more importantly, taking advertising dollars with them). The problem with old media and the 'establishment' is that they come from old money and old money has old traditions. It's an exclusive society that moves at a snail's pace and doesn't welcome outsiders - their pulse on their audience comes from research firms. Fortunately, Silicon Valley has forced its way into the business lexicon.

As old media tries to revamp its online strategy and cut back on unnecessary expenses - like employee benefits and salaries - Silicon Valley is rewriting the book on employee morale and business etiquette. As a former 'old media' employee (I worked in local television news), and current start-up employee, the differences are less than transparent. Here's a list of ways Silicon Valley is rewriting the book:

1. Golf is dead - it used to be that business deals were sealed on the course. Nowadays, a Silicon Valley business deal can go down on the Wii! A few months ago, and this is no joke, a MerchantCircle deal was sealed over a few weeks of meetings playing Halo 3 and Call of Duty 4.

2. Too strong handshakes say 'I'm capable and solid, but I will never innovate' - I had a friend the other day who told me a guy shook her hand so hard, the ring on her finger left her with a welt! She was angry about this unnecessary handshake, which totally spells out, 'I'm old school.' I don't think anyone is impressed with strong, painful handshakes anymore. If you are, you're old. When shaking, go with firm and sturdy.

3. Put away the Tie - I've written about the death of my ties - too which I have some really, REALLY nice ones - but there's just no need. Recently, I went to a Yellow Pages Conference (the oldest of old media, especially in innovation) and even they were beginning to take heed, as over half the participants were tie-less. You will never find a tie at an internet conference. T-shirt, blazer - you're good to go.

4. 8am to 5pm? Only if she's 5'3' - OK, so that made no sense, but I had to pay tribute to Sir-Mix-a-Lot and his revolutionary ideas that mobilized a generation of thought - similar to Silicon Valley. Gone are the days when you had to be in the office at 8am. People are working their own hours as they fit their schedule and production best.

5. What you do matters - I suspect there are a ton of companies who have employees who don't ever get to see what they contribute to the end product. That's not the case with Silicon Valley companies - almost everyone has an integral part in their company and if you don't pull your weight, good luck trying to hide that from your coworkers.

6. Innovation and changing course happen everyday - Unlike George W., Silicon Valley analyzes situations and can reverse course and revamp strategy based on market conditions. This happens quickly and ideas and employees that don't work - are scrapped.

7. Alcohol is acceptable in the office - this was a crazy concept for me to get used to. You get fired for that kind of stuff in Old Media. I first heard about it from my buddy who works at EA, telling me that every Friday the company would roll out a few kegs and leave them out by the soccer field. At start-ups beer is a commonly stocked item in the refrigerator - and people celebrate at their own discretion.

8. Age is nothing but a number - no longer do kids fresh out of college or grad school have to waste years working as a peon trying to work their way up the corporate ladder - you want to be a VP of Business Development? Director of Marketing? You can be. Head to Silicon Valley, where people can make things happen without corporate bureacracy ageism, racism, or sexism. Now THAT is sexy.