Home » TLC » How Wearing Makeup Helps with the Ladies

How Wearing Makeup Helps with the Ladies

I took a break from my glamorous lifestyle last weekend to step back into the world of reporting. If you've been counting (which I would be very disturbed if you have), it's been almost 21 months, 3 weeks, 4 days since I've been 'on-air' (not that I'm counting). That's excluding my forays as product spokeperson for MerchantCircle - to which I do a pretty darn good job! It's great to finally be able to put these good looks to use again. Sometimes I feel bad sleeping, because no one can see how good I look in those wasted hours.

So the freelance gig I got was reporting for NADA-TV for the National Automobile Dealers Association Convention at the Moscone Center in San Francisco. I got to interview Bill Ford, Chairman of Ford Motors, and Mark Fields, President of the Americas, which was pretty neat talking to two people who ensure the jobs of so many Americans. First off, I had to dust off my makeup - MAC that is. It's the best, and my face deserves it! (Just kidding, it probably deserves plastic surgery). Anyway, everytime I think about MAC makeup, I think about that TLC song '...all the makeup that MAC can make, but if, you can't see inside you.....' I bet they never thought a guy would be humming that song everytime he put on his MAC makeup.

I mostly use makeup to take the shine away, but there are some guy reporters who cake it all over their face, it's quite alarming if you ask me. Then again, could you imagine being broadcast in hi-def, with every pore left open for analysis? I digress - other than occasional weird stares from guys and girls alike, it's actually a pretty good conversation starter. I can't tell you how many situational stories I've been able to pull out of my butt about wearing ma 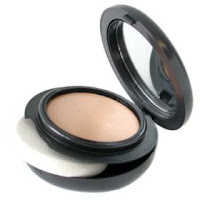 keup. It breaks the ice and girls love stories of humor, humility, and modesty.
So go out there and buy yourself some MAC makeup, 'borrow' a dress from your mom, and parade yourself around the house for an evening. You'll feel good about it. And you SURE will have some stories to tell.
Sincerely,
Kevin Leu
The Silicon Valley Bachelor
P.S. Don't forget to hide your 'junk' - Silence of the Lambs style - you'll be glad you did!