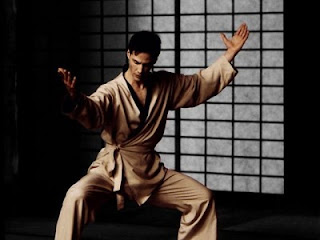 Well, I just got back from LA, where we sat next to Keanu Reeves at Pink Taco, I won an iPhone, picked up a few free t-shirts, and a really nice thermos set from Yahoo!. I was there for the Kelsey Conference where local internet nerds meet up and talk business, but it was a real banner week for me in the freebie department!

First of all, I didn't have to plop down $9.50 to watch Keanu Reeves in his latest Oscar-Caliber performance. He was so close to us, I watched all his MTV Movie Award mannerisms discreetly from about 7 feet away. I didn't even tell my coworkers at the table it was him until halfway through dinner, because I didn't want them to all whip their heads around in excitement. Being a former celebrity myself, it's hard to enjoy evenings out with friends when everyone's staring at you. All the women want to be with you and all the men want to BE you. Damn these rugged good looks!

Well, my dinner ended prematurely, because my boss yelled at me at dinner and I ran back to my room crying. OK, I didn't, but I did leave early to get some work done for the conference until the wee morning hours. Thank goodness for minibar vodka! The company I work for, MerchantCircle, has recently had a lot of good press, first at the beginning of November for a Series B financing round of $10 million dollars, and then at the Kelsey Conference for which we announced a partnership with Citysearch, the Godfather of online directories and reviews.

Read the press below, in particular the Screenwerks one, which says we're a a potential 'takeover target.' Like Borat said, 'niiice.' Hopefully it's a hostile takeover, Richard-Gere-style! Sell the parts to the highest bidder, for which I would probably get sold for organ donations and possibly hair for barbie dolls.

Here's the picture below of me winning the iPhone with my pal, Renee Henry from Matchcraft. Yes we do know each other, and no she swears she did not rig the drawing (to which I would not have cared much anyway). After winning, I happily put on a black Matchcraft shirt over my blue striped dress shirt. Heck, I probably would have painted my body in Matchcraft blue and went streaking for an iPhone. 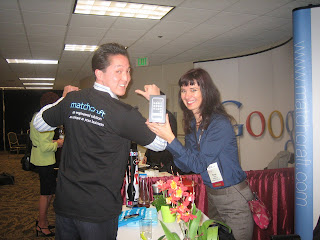